Did you know that during 2011 sea level rise went into reverse and lost 5mm from the global oceans? No? How about that since then, much to the chagrin of climate deniers, sea level rise has accelerated from 3.18mm per year - the rate from 1993 to 2010 - to increase to 10mm per year over the last two years. This acceleration more than makes up for the pothole. The primary cause of this sea level 'speed bump' was the back to back La Nina which moved a phenomenal amount of water from the global oceans to the land. The water has since been making its way back into the world's oceans.

The question arises, does this explain the 10mm per year increase in sea level rise over the last 2 years? Is ocean thermal expansion or ice sheet melting perhaps contributing more? This may also be the start to an exponential sea level rise which NASA climatologist James Hansen has argued is a possibility. Rob Painting on Skeptical Science says that there is no evidence yet to suggest that ice loss from Greenland or Antarctica has added to the speed bump in any significant manner. We will have to wait and see what the impact of future El Nino or La Nina (ENSO) will be on sea level rise, and keep watching the rate of mass loss from the ice sheets.

I came across this lecture by climatologist Kevin Trenbeth in which he talks about this sea level speed bump as a unique occurrence in recorded history. While previously there has been slight reductions in sea level rise corresponding to La Nina years, this event is a prominent change. Trenbeth discusses this extreme event near the end of his lecture on October 15, 2012. It is well worth watching the Youtube video if you have a spare 1 hour and 5 minutes. He provides an excellent introduction to climate change and extreme weather events and he is an animated speaker with clear and informative graphical and text slides.

Sea Level: 2.5mm out of the global ocean dumped on Australia

Trenbeth elaborated on the sea level rise bump and explained the rains in late 2010 and early 2011 caused a fall in global sea level of 5mm, about half of which was estimated to have fallen on Australia in this period. According to NOAA 2010 was the wettest year on record globally and also the wettest for Queensland. Indeed, September 2010 was Australia's wettest month in 111 years of precipitation records. The Bureau of Meteorology (BOM) estimated 2010 and 2011 was the wettest two year period ever recorded caused by back-to-back La Niña events. Despite this wet period there was still a strong drying trend in the south-east and south-west of the continent with a consistent reduction in Autumn and winter rainfall and streamflow.

So while the sea level dropped 5mm in 2011, in the last two years sea level has more than made up for this pothole with approximately 20mm rise, an average of 10mm rise per year more than 3 times the previous trend from 1993 of 3.18mm per year.

I have queued the video to start at 57 minutes 7 seconds in:

Here is what Trenbeth had to say on the sea level bump and Australia's rainfall in 2010 and 2011:

"This is the global sea level record. I mentioned before that sea level goes up with warming both because the ocean is expanding and because there is more ice on land melting going into the ocean to fill the ocean up. Overall it is going up at a rate of 3.1mm per year. So a steady rise overall for this record."

"Something like 55mm since the record began and this is when we launched into space a series of satellites in the different colours here that are looking down making measurements of the global sea level to millimetre accuracy using an altimetre. So you can see the individual measurements here, and the monthly values that are on here as the blue curve. We see some wiggles here. This turns out to be an El Nino, this turns out to be an La Nina. And then there is this spectacular drop here relative to what was expected by about 5mm in 2010."

"What actually happened in this period. Looking now at January to April of 2011 versus 2010. What you can see is all this rain that occurred in Australia. Rains down here and up in Northern Siberia, the Missouri flooded in North America as a consequence of very very heavy snows at this time, and the tremendous amount of rains that occurred in Columbia and Venezuela. What actually happened here is that there was sufficient water taken out of the ocean and dumped on land in this event. This was a unique event, in recorded history at least, to lower the sea level by 5mm. 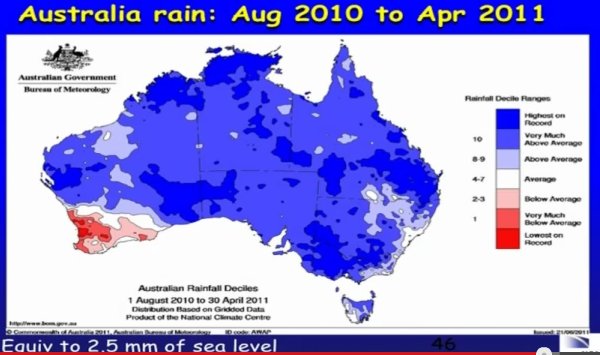 "The most spectacular example of this was what actually happened in Australia. In Australia this is the record from the 1st of August 2010 to 30th April 2011 and the dark blue spots was where it was the wettest on record for this period. All the rest of Australia except for the south-west was in the top ten percentile, in other words it was very wet in those regions as well. It turns out if you add up all the rain that occurred there, it is equivalent to taking 2.5mm out of the global ocean and dumping it on Australia. The consequence was there was a big lake that was formed in the middle of Australia which you call Lake Eyre. This is pretty remarkable that you can actually lower the global sea level by this amount just by dumping so much water on land."

Trenbeth elaborated that climate scientists can't tell whether climate change is impacting the operation of El Nino (ENSO) as climate models are at present unable to sufficiently model the phenomenon. "It may well be that it is changing, but we can't really tell. We do know that the floods and the droughts that go along with El Nino and La Nina are getting more severe in parts of the world. So that is probably the best interpretation we can give as to what is actually going on. " he said.

Here is an up to date graph of sea level rise downloaded 30 March from AVISO website. It shows mean sea level (in centimetres) since 1993 obtained by satellite altimetry observations. Annual and semi-annual signals have been removed to reveal the long-term trend. The glacial isostatic adjustment (GIA) of 0.3mm per year is added to account for the slumping of ocean basins.

Trenbeth on extreme weather and its links to climate change 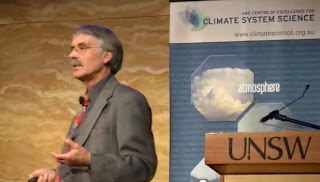 The lecture is well worth watching in full as Trenbeth explains changes in the climate system and impacts on extreme weather events. In Particular he focuses on the 2010 Russian Heatwave, the 2009 Black Saturday bushfires, increasing record sea surface temperatures (SSTs), Flooding in Queensland in January 2011 which innundated Brisbane and a third of Queensland declared a disaster area, deals with the 2011-2012 back to back La Nina, one of the strongest on record, which moved so much water from the oceans to the land that a drop in global sea level of 5mm was recorded.

Here is Kevin Trenbeth explaining the basics at about 20 minutes into the video:

"Let's talk about what is actually happening physically in terms of climate change. Carbon dioxide is increasing in the atmosphere, the greenhouse gases are increasing. So what does that do? Well Carbon dioxide is a greenhouse gas which means it helps to trap some of the energy that would normally escape to space. Infrared radiation that would normally go back to space. Scientists call this radiative forcing. If you estimate what that is, it turns out it is quite small. The effect of the greenhouse gases in the atmosphere is about 1 to 2 per cent of the natural flow of energy through the climate system. And so on a day to day basis this is actually not something that you would perceive in any way. But it is always going in the same direction. It is always producing a warming."

"Now the main place where that accumulates is in the oceans, so the oceans are systematically warming up, sea levels are rising as a consequence of expansion of the oceans. In addition there is a lot of ice melting on land filling up the oceans which also contributes to sea level rise. If we look at the accumulative affects for the ocean we see that the ocean temperatures have indeed warmed up and ice has melted and the atmosphere above the oceans is warmer and it turns out is also moister. I'll give you some numbers on that very shortly."

"On land it is more of a mixed bag of things, but the places when it does accumulate on land is when we get into a drought. I want to expand on that a little bit later. I want to argue that the effect is a 5-10 per cent effect in terms of it's changes in precipitation. In particular precipitation intensity. So this is larger than the 1 to 2 percent and this is perceptible."

"So one of the key things then is the environment that all storms form in these days is different than what it used to be say prior to the 1970s. In particular storms reach out and grab moisture from over the oceans and bring it on land. this is part of the hydrological cycle. There is more moisture there. So as a result it rains harder when it does rain."

"One of the things that happens with a warmer atmosphere is that it can hold more moisture. This is actually very fundamental to why it rains. ......"

"With regard to the attribution of extremes, often we cannot say that these events were caused by global warming. In fact we are often asked that: 'Is this due to global warming?'"

"It is not the right question because I would say there is always a global warming component to what is going on now a days. But most of what is going on is the natural variability: the weather. I mentioned this before. How large is this effect? I mentioned it was in the neighbourhood of 5 to 10 per cent and we can argue that that is the kind of number you get in an extended drought. We could talk a little bit more about that if you like. But I do think because we are breaking these records that it is highly likely that these events would not have occurred without global warming."

"Just remember, this is the only planet that we have got" he concluded with a slide showing the blue globe of planet earth in space with the text: There is no Planet B.

Kevin Trenbeth visited Australia last year and spoke at the University of NSW under the auspices of the ARC Centre of Excellence for Climate System Science. The lecture was delivered on October 15, 2012.

Kevin Trenbeth is the Distinguished Senior Scientist at the Climate Analysis Section at the National Centre for Atmospheric Research (NCAR). The lecture was introduced by Robyn Williams, one of Australia's best known science reporters and commentators for the Australian Broadcasting Corporation who has been broadcasting his radio program, The Science Show, on ABC radio since 1975.