The melt season on the Antarctic Peninsula has been getting much longer over the last 60 years, at some locations doubling in length according to the research lead by Dr Nick Barrand of the British Antarctic Survey. Increased melting season increases the melting stress of ice shelves which hold back significant glacier discharge and sea level rise.

The Antarctic Peninsula is a mountainous region that extends north from the West Antarctic Ice Sheet towards South America. The area is warming much faster than the rest of Antarctica at around 3 times the global average, although the West Antarctic Ice Sheet (WAIS) also appears to be rapidly warming according to measurements at Byrd polar station. Temperatures have risen by up to 3 oC since the 1950s. The warming has been linked to a strengthening of local westerly winds, causing warmer air from the sea to be pushed up and over the peninsula. 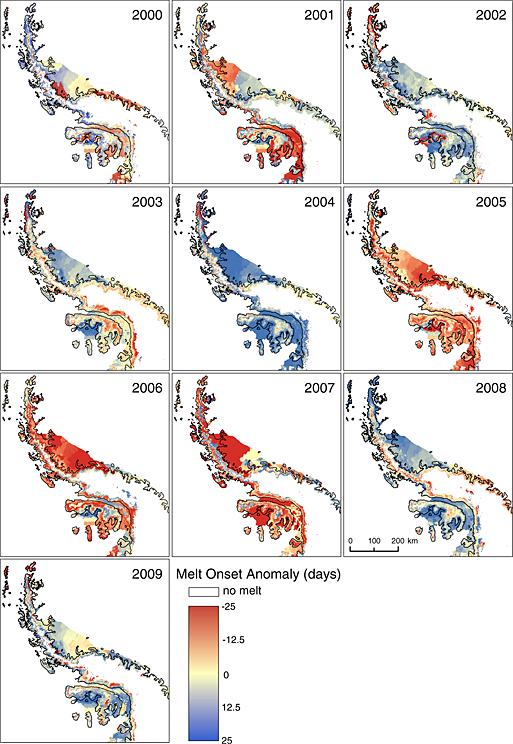 The most recent research by Dr Nick Barrand examined and analysed the data from 30 weather stations on the peninsula. "We found a significant increase in the length of the melting season at most of the stations with the longest temperature records" he says. "At one station the average length of the melt season almost doubled between 1948 and 2011."

As well as weather station data, the team used satellite microwave sensing to detect the extent of meltwater. Melt season maps were produced for the seasons from 1999 to 2009 which showed a correlation between several major ice shelf breakup events and longer than usual melt seasons.

The British Antarctic Survey in an article by David Vaughan says there has been rapid warming on the Antarctic Peninsula. In the past 50 years "around 25,000 km2 of ice have been lost from ten floating ice shelves [Cook, pers. comm., 2008], 87% of glacier termini have retreated [Cook, et al., 2005]; and there is evidence seasonal snow cover has decreased in recent decades [Fox and Cooper, 1998]."

"A recent study of over 300 glaciers on the west coast of the Antarctic Peninsula, showed that from 1992 to 2005, glacier flow rate increased by around 12%. This widespread acceleration trend was attributed not to meltwater-enhanced lubrication or increased snowfall but to a dynamic response to frontal thinning. This change in glacier flow, together with increased meltwater runoff and acceleration of glaciers resulting from the removal of ice shelves, suggests a combined northern Antarctic Peninsula contribution of 0.16 ± 0.06 mm a-1 to global sea-level rise. This is comparable to the contribution from Alaskan glaciers, which cover a similar area and have experienced a similar rate of warming in recent decades. If summer warming continues, these effects will also continue to grow." 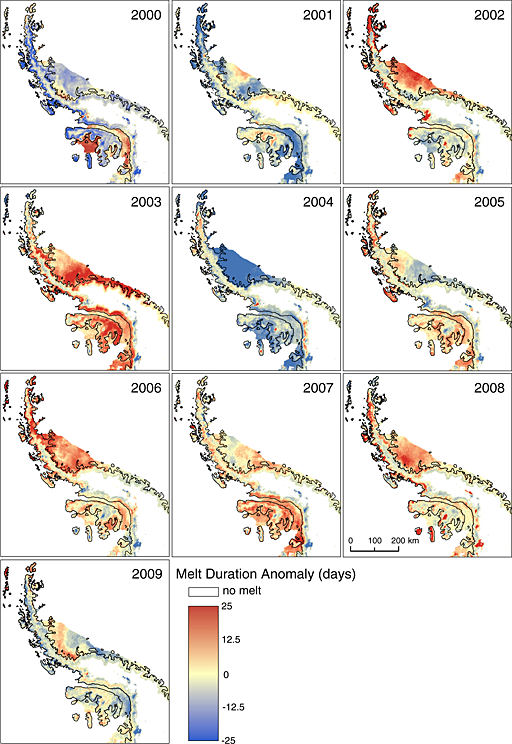 Impact of warming on penguins and marine ecosystem

With the warming of the Antarctic peninsula summer sea ice is being reduced which affects the availability of krill. This then impacts on the food chain to the higher predatorslike penguins and whales. Ten of the 18 penguin species in Antarctica are already in decline. Read my April 2011 article: Penguin numbers suffering with krill decline due to Global Warming or my October 2010 article: On the brink: Penguins face an uncertain climate future.

NBC's Kerry Sanders voyaged to Antarctica in the 2012/2013 summer and wrote an article about the climate change impact on penguin species of the Antarctic Peninsula. Watch this brief youtube video with Kerry Sanders:

Invasion of the King Crabs

Undersea, there is a massive invasion of King Crabs threatening to occurr up from the warmer water in the Palmer Deep off the west Antarctic shelf. The cold water has excluded the crabs from the continental shelf for more than 14 million years. Continental Shelf waters have been kept chilled by the circumpolar current. But water temperatures are starting to change. Once the waters of the continental shelf warm enough, the crabs will succeed in invading, wiping out the Antarctic shelf bottom ecosystem.

The unique marine ecosystem of the colder Antarctic shelf consists of soft skinned and light shelled species which will be no match for the invading crabs. Scientists estimate the invasion of the continental shelf could spread in the next 10 to 20 years.

A September 2011 paper in Proceedings of the Royal Society B - A large population of king crabs in Palmer Deep on the west Antarctic Peninsula shelf and potential invasive impacts (abstract) - described the threat:

"The lithodid occurred at depths of more than 850 m and temperatures of more than 1.4°C in Palmer Deep, and was not found in extensive surveys of the colder shelf at depths of 430-725 m. Where N. yaldwyni occurred, crab traces were abundant, megafaunal diversity reduced and echinoderms absent, suggesting that the crabs have major ecological impacts. Antarctic Peninsula shelf waters are warming at approximately 0.01°C yr-1; if N. yaldwyni is currently limited by cold temperatures, it could spread up onto the shelf (400-600 m depths) within 1-2 decades. The Palmer Deep N. yaldwyni population provides an important model for the potential invasive impacts of crushing predators on vulnerable Antarctic shelf ecosystems."

Read Douglas Fox December 2012 article on this threat in Nature: Polar research: Trouble bares its claws. What is bringing this invasion? Warmer ocean currents from the deep ocean are raising the temperature of the continental shelf waters. These currents will also melt the ice shelves holding the glaciers and ice streams back.

Watch this brief 12 minute youtube video of one of the expeditions to analyse where the crab invasion is at.